It’s not just about the Chinese T-26, but only about models from China – namely about the line of plastic kits from HobbyBoss. While Zvezda was thinking how to color another version of box art, in the Middle Kingdom, in a couple of years, they launched real tank production, starting with 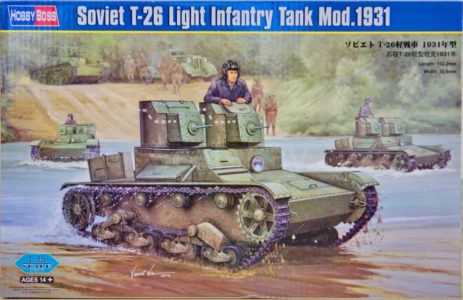 further, without much comment, on the growth of commodity indices: 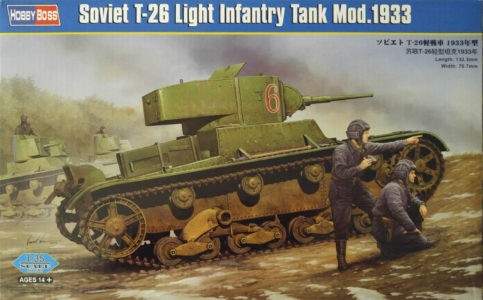 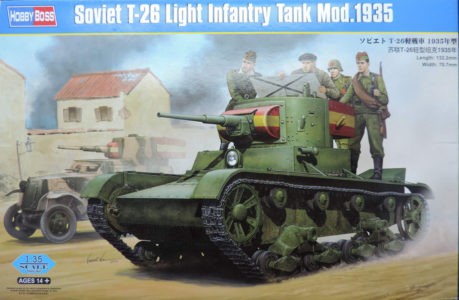 From the review of this particular box on the Panzer35 almost 6 years ago, I debuted with an analysis of the design features of this tank, which resulted in a separate review of Genesis of structural elements of serial T-26 tanks (Structuring.), The first of my materials to be awarded a “parking” in the topic header. What I am still proud of, glad and what supported and stimulates me in the development of the topic.

This particular tank I never assembled 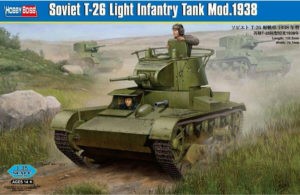 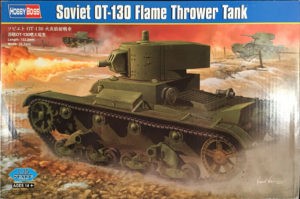 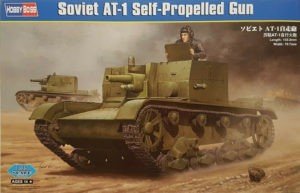 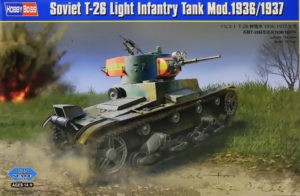 I have a great suspicion that when launching a large line of models into production, people who have decided this are somehow preparing, planning and thinking about something. Of course, there are thoughts about barbecue for the weekend, but now about something else.

The T-26 tank had a long production life and many modifications, some of which were reflected by HobbyBoss in plastic. I decided to “dissect” his ideas by understanding the differences in the gating frames in different sets. It is quite possible that this understanding will be useful to you and, perhaps, will be used by me if I decide to combine this kitography and my old research.

Well, the essence of this study is that if one of these components changed on any modification in real life, and the gate remained unchanged, then there is a jamb and a historical discrepancy. I think it’s clear.

The rest of the kits do not have it, but instead there is a Frame B with late-type rollers

If you look closely at the Frame A, you can see detail A5 – spare rollers of a late type, which are available in all sets, but not all can be used.

Frame D with leading roller, sloth and little things is the same for all sets

It was with this moment that the first negative (not in my address, but in the model) review in my review from comrade SALIVAN was associated “What can I say … The rollers are early, and the sloths are late, with ribbing ….“

The Frame E is also the same for everyone, which will allow you to have an extra box jack on later modifications

The tracks are also the same for everyone, namely the scattering of the tracks themselves, under the designation T

Then everything is different. The uniqueness of the sprues for the two-tower modification is clear: the towers themselves (Frame G)

For the rest of almost all single-turret machines, the common Frame H with a tower of the 1933 model (I think it can be called so conventionally)

To take into account the peculiarities of the turret set 83810, an additional Frame U had to be released

And it is for her to add the Frame WF with an anti-aircraft machine gun. WF5 parts are not rollers, but machine gun magazines.

For tanks of 1933, a separate board with a gun mask and horizontal plates is provided (Frame K)

The difference with similar parts on the Frame M is visible to the naked eye.

Almost the same configuration, the Frame L was released for the set 82496

It is clear that in order to display late machines, their specific features had to be taken out on a separate Frame N

The kits are completed with photo-etched parts. Each has the  Frame A  with fender mountings and vertical ventilation duct grill

The Frame C contains the features of the later versions

Well, there were also transparent parts: headlights glazing. For the first two kits (early tanks is a headlamp without armor (Frame Q), for the rest it is Frame R. For kits 82497 and 83810 there is an additional Frame S with glazed infrared headlights.